Igniters more often than not, are able to scale their Agribusinesses right after the programme. Some of them receive funding for their agribusinesses, some gain recognition in the media, others get invitation to speak on high level platforms. We keep staying in touch with them to know how they are doing, monitor their growth and detect any challenges and offer support however we can. It allows us to share news, upcoming events and opportunities for sharing resources. 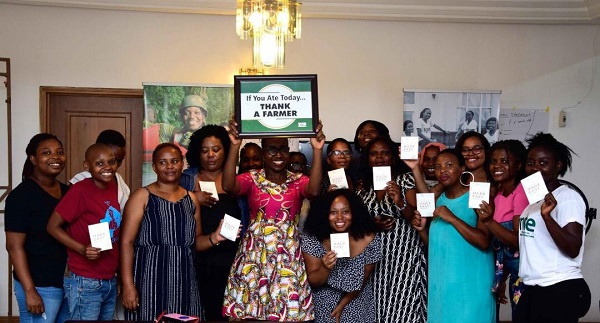 Igniters made huge difference in Africa’s Agribusiness in 2021

These are just a few of the many Igniters making impact on the African continent with their Agribusinesses.

Mr Alfred Amoah, the Chief Executive of Bibiani Anhwiaso Bekwai Municipality, commended Marian Ofori Twumasi, for winning the National Best Youth Farmer Award. Mr Amoah expressed excitement at the exploits of the young lady and said it should inspire the youth to venture into agriculture. “Marian has brought great honour to her family, community, municipality, region and more importantly, brought dignity to womanhood across the country. ” he said. Recounting her experience, Marian told the press, she gave up but for the Ignite programme.

The farm had almost been run down to the ground. There was nothing to show for all the funds that she had been remitting into the venture. It was during that period that she began to have real doubts about whether farming was really for her. After all her efforts, she had nothing to show for it. Utterly broken and seriously considering closing down the farm, picking up her certificates and coming back to look for a job, it seemed all over for Marian’s farming dreams. During that painful period, an advertisement for IGNITE, an agribusiness programme designed purposely for young women in agriculture, caught the attention of her husband, Seth Ofori Twumasi. Sensing the potential of the event to help his wife, Seth went ahead to register his wife on to the programme.

The training at the IGNITE provided the spark she needed to revive her dreams. It was at the programme that she realised the potential of what she had. Listening to the stories of all the participants from various African countries and comparing what she heard to her own story, Marian realised that she was on the right path. With her confidence revived, Marian went back, picked up pieces of what was left and put in 101% into the enterprise.

Prior to this big win, she had become the best oil palm farmer in her municipality in 2020.

Lebohang Dhludhlu is the CEO of Nkanyezi Farming. The farm now boasts of clients from a large number of towns and townships in Mpumalanga and Gauteng. Lebo D (nickname at Ignite) who is also an engineer is in the final stages of sealing a deal with a national retailer to supply 15 000 birds a week to them. With their demand surpassing the number of birds they grow, they have leased two fully functional and automated coops in Carolina that have a capacity of 60 000.

Soybean is one of the under developed crop in Ghana despite its’ high economic gain, both market and non-market benefits. Witama Agribusiness founded by Igniter Alberta who is committed to impactful agribusiness earlier this season supported 420 farmers in 8 communities within the municipality through its out-grower scheme programme by providing these farmers with mechanization service, certified seeds, foliar fertilizer and crop protection products for the cultivation of 360 hectares of soya beans.

In a two-day monitoring and assessment, together with the Regional Agriculture Director, some officials from the Municipal Agriculture department and partners of the company, Alberta Afriyie-Mensah, CEO of Witama Agribusiness, emphasised on farmers commitment to the program during her address, as the company is willing to expand the program in the seasons ahead and their commitment or non-commitment will determine their future businesses with the farmers.

It began with a phone call on the 30th of November 2021. The former president of Malawi, Dr. Joyce Banda invited 2021 Igniter, Christine Bhamu to her house for a meeting. After this strategic meeting, Christine was earmarked to assist small holder farmers to set up banana plantations by offering them technical support and supply of banana suckers/ seedlings; in a community project spearheaded by the former president together with a member of parliament for a constituency in Lilongwe.

Christina Zimba Bhamu is a co founder of Village Foods; a start up which produces organic healthy bananas and multiplies banana suckers among other seedlings to allow other farmers access disease free planting materials.

Talking about this opportunity, Christine said she is very grateful to the Ignite programme for inculcating confidence in putting what she does out there. “This whole story began with social media visibility. Facebook. That’s where her work was known. Ignite program always emphasised on being ready for opportunities. Though the meeting was on a short notice; it went well and all documents were ready. It was very exciting to rub shoulders with the first ever female president in the country and second in Africa at her official residence.”
Christine said.

Chinomso Onyinyechi Onwuka is the founder of a natural skin and hair care brand- Nomsheamild Care Hub. She is passionate about addressing the skin care needs of fellow women with African Sheabutter. Her business discourages use of chemical based body care products. She is helping women have the best look they desire irrespective of their skin texture or complexions.

Onyinyechi Onwuka, a skin bleaching and cancer crusader is creating awareness on the use of harmful chemicals and solving these problems using her natural skin and hair care products made from plants, fruits, herbs, nuts and healthy oils. She said there are cases of people with burns, sprain, muscle pains and cracks which get healed with African Sheabutter which she describes as “gold”. She said, “We are here to discourage the use of chemicals on the skin. Your skin can be beautiful with natural skin products. Say no to bleaching. Say no to cancer.” source: www.apnewsng.com

Yomi Alder is the founder of Pliris, an organic waste management solutions company operating across South-West Nigeria. The company champions Composting As A Service (CAAS) and advocates food waste diversion from landfills through effective waste segregation at the point of generation. She emerged as the winner of the Circular Economy Hackathon.

The Circular Economy Hackathon (CEH) is an initiative of The Kingdom of Netherlands, powered by the Dutch Consulate.

A total of 304 applications were received across Nigeria for the CEH and 20 entrepreneurs were selected to participate in the program. After a thorough review of the applications a total of twenty entrepreneurs were selected to hack the problems presented by the participating companies. After two rounds of elimination and the decision of the judges, Igniter Oluwayomi Alder, the founder of Pliris who worked on the challenges presented by Farmforte was declared the winner of the first Circular Economy Hackathon in Nigeria.

E-Moto Limited has taken the task of championing household cooking energy as an area of sustainable development for women of East Africa Region. Led by Lorna Omuodo its Founder who has for 8 years been actively lobbied for Government policy shift on taxation successfully and finally got all taxes zero rated on denatured alcohols for use as household fuel and now introduced bioethanol into the market as a safe alternative fuel system to switch women into carbon neutral option of Tier 4 stoves that have a clean burn  affordable yet cooks faster and efficiently and meals can be made using the retrofit stoves that have been using kerosene and socially acceptable by the women. This has reduced suffering in daily food preparation, management and family health nutrition, yet created fuel saving allowing the much-needed income saving to allow three full meals and family improved family life. Due to this, Lorna was awarded by the French Embassy in Kenya.

The French Embassy in Kenya and Somalia launched “ARESSOK” an initiative that helps to strengthen thesocial enterprises in Kenya under the Social Enterprise Society of Kenya.

Linda Atibilla is the founder of HopeGivers, an agro processing company in the Northern sector of Ghana. She works directly with over 70 women and several other women indirectly. HopeGivers are now giving hope to young women in their communities by providing them with skills and value addition training with the indigenous trees, fruits and spices.

Igniter Linda is tackling high poverty levels, providing jobs and reducing migration. She has directly provided jobs to over 70 women and provided skills to thousands of women in the Northern part of Ghana. She organises training for individuals, groups, companies and enterprises. She has vast knowledge in essential oils and butters.

Scroll to top
We use cookies on our website to give you the most relevant experience by remembering your preferences and repeat visits. By clicking “Accept”, you consent to the use of ALL the cookies.
Cookie settingsACCEPT
Manage consent

This website uses cookies to improve your experience while you navigate through the website. Out of these, the cookies that are categorized as necessary are stored on your browser as they are essential for the working of basic functionalities of the website. We also use third-party cookies that help us analyze and understand how you use this website. These cookies will be stored in your browser only with your consent. You also have the option to opt-out of these cookies. But opting out of some of these cookies may affect your browsing experience.
Necessary Always Enabled

Performance cookies are used to understand and analyze the key performance indexes of the website which helps in delivering a better user experience for the visitors.

Analytical cookies are used to understand how visitors interact with the website. These cookies help provide information on metrics the number of visitors, bounce rate, traffic source, etc.

Advertisement cookies are used to provide visitors with relevant ads and marketing campaigns. These cookies track visitors across websites and collect information to provide customized ads.

Other uncategorized cookies are those that are being analyzed and have not been classified into a category as yet.